Daughter of Richard I (Normandy), Emma was born in Normandy (France). As Royalty, her life was fairly set with her marriage to Aethelred II (King of England). Done to form a political alliance between The Normans and England, she and her husband had to flee England during the raids of the rival Viking faction commanded by Svein Forkbeard in 1013. In exile back in Normandy, she outlived her husband and was forced back into a political marriage with Svein's Son – Cnut. With his death in 1035, Emma was placed back into exile by her stepson – Harald Harefoot. With the final enthronement of her Son, Edward The Confessor - she would see the last of “true” English King take the crown. That would end in 1066........ 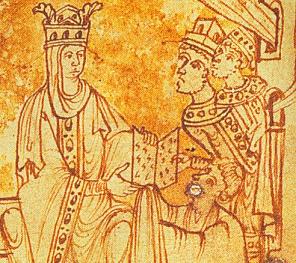