An Embrasure is an opening in a crenellation or battlement positioned between two solid raised positions. An outward window splay (or space) for an arrow slit would be carved into this piece. This would also allow Archers and missile men to fire upon targets with relative safety. The spay was large enough to also accommodate a soldiers related equipment. While the common design for the arrow slit was a vertical line, an innovation called a "Crosslet Loop" was designed. Plainly, Archers could only fire up an down from the arrow slit. The Crosslet Loop was carved into the shape of a Cross. Now missile me could fire left to right as well as up and down. Most castles would have this type of design incorporated into it's construction. The Pill Box of the late 19th early 20th Centuries, is related to this idea. 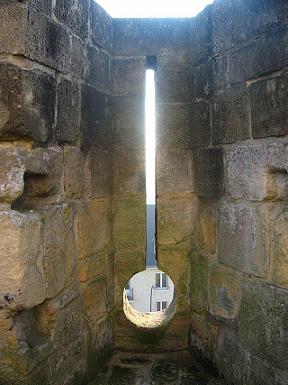