As we have seen with the often excessive and quite unhealthy practice of make-up practices of The Elizabethan Era in England, ''Beauty'' often was a long term death sentence. However, the manner in which hair was worn and styles was somewhat less dangerous – but often time consuming and based on the whim of The Queen herself – Elizabeth I. Hair was often highly elaborate in setup and decorated to suit the particular Court Ceremony or function.

As was prescribed by ''good breeding'' – a young girl (and well into teenage years), wore her hair unadorned and quite long. Hair for women was not cut and was a sign of her Maidenhood (or virginity). Upon marriage, She had to ''bun up'' or roll Her hair up and off the shoulders. Bangs and side curls were not acceptable. A clear forehead, neck and shoulders was preferred (and enforced) by both Court regulations and Nobility standards.

In terms of Court, The Queen set the standard. Elizabeth was a natural Redhead. Despite the massive loss of Her hair (she had upwards of 80 wigs), each was a different style which was emulated by ladies in Court. IF The Queen bedecked Her hair with pearls and jewels, so too did the Court Ladies. In terms of wigs, seen needed due to the previous Article which outlined just what Elizabethan Make-Up DID to one's skin and hair, more chemicals (even though natural) were added. Often styles were created with salves of Clenadine, Oils and Seed pastes. To be sure, the odor was awful, but made tolerable by copious amounts of perfumes. 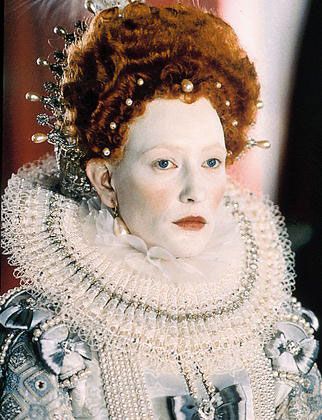 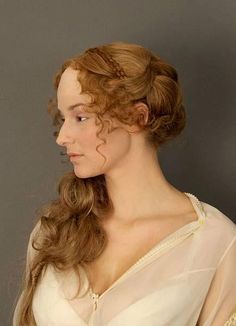