The 4th Century BC Ekdromoi were Light Greek Infantry (Foot) Soldiers – comparable to The Hoplite Class of Fighters. The name “Ekromoi” means “Out Runners”. This was best applied to their primary tactic of being deployed. Marching in the traditional Phalanx Formation, upon contact with an Enemy, The Ekdomoi would break Ranks and swarm the Enemies Flanks and even attempt to take positions on The Enemy Rear. Lightly Armored with Helmet, Sword and Shield – all these weapons were seen as essential to their speed and ability. Much of their tactics would be also comparable to that of a Shirmisher. The Ekdomoi were the only Troops allowed to break Formations and engage an Enemy. They often sustained heavy casualties. A “Light Horse” version was once deployed, but it was not as successful as the Foot version. 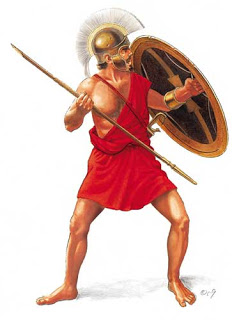