The principle component of Ancient Egypt's Military, The War Chariot was “introduced” in the 15th Century B.C. - by Egypt's “enemy”, The Hyskos. Expensive to make (and frequently breaking down due to terrain), a typical Chariot was used as a mobile platform for Spearmen and Archers. This afforded a more stable firing platform than Cavalry. A single axle connected to twin wheels, a later stabilizer “T” Bar was added to the axles, gave more control. A long Lead Bar (15-feet), went from the lower axle to a brace for normally 2 horses to be attached. The added component called a Yoke Saddle controlled them.

The Chariot Basket featured a 3 foot containment shield which stretched from the front to the rear (and opened inward). A typical Chariot afforded a Driver and either a Spearman or Archer. Specialized outer “compartments” (built into the Shield Basket), carried extra arrows or spears (depending on the troop deployment). Chariots were were fast (due to the lightness of materials used). The Ancient Egyptians developed massed deployment tactics which far surpassed their enemies. These tactics would enable them to conquer and expand their Kingdoms. Used by Commanders in the field for “observation platforms”, a common problem with Chariots was their lack of armor protection and well as issues with speed (and controlling the Chariot when at “full run”).

Many accidents in deployment happened. Often, this was why so many were deployed in battle (as a form of attrition). In some cases, masses of enemy Spearmen could compensate for mass Chariot attacks. They would simply concentrate their “fire” on the lead Chariots. Several “falling” Chariots could create obstructions that were hard to correct “at speed”. Still, the Egyptian War Chariot was the pinnacle of military technology (for The Period), which would continue until “countered” by Ancient Rome (and the eventual decline of The Egyptian Dynastic Periods). 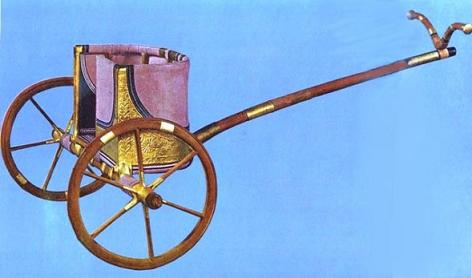