Major “Eddie” Rickenbacker was an American Ariel Ace of World War 1, and responsible for founding the famous 94th Aero Squadron. Strangely – while in England before America entered the War, his last name “Rickenbacker” was mistaken for German (he was of Swedish descent). As a result, he was watched as a Spy. When America entered the War, he served in the infantry. He had to prove his “worth” as a Pilot (due to the lack of education he had). Eventually chosen for Flight Training, Rickenbacker was eventually placed in The 94th Aero Squadron (“The Hat-In-The Ring Squadron”, as it was nicknamed). He proved very quickly his fighting abilities. He eventually became Commander of The 94th. Rickenbacker was one of the first Americans to earn The Congressional Medal of Honor for actions in combat. Rickenbacker supposedly had 300 combat air hours (more than another American Flyer). He is credited with 25 confirmed kills and the destruction of 5 German Observation Balloons. Rickenbacker's “after War” claim to fame was as the founder and first President of Eastern Airlines (one of America's oldest Passenger Airlines from 1926 to 1991). He died at age 82. 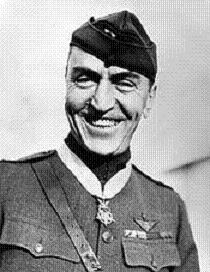