A Parliamentarian Regiment, The Troop of Horse was raised in 1642 (London). They participated in over 15 major and minor engagements with Royalist Forces. Originally independent, they were joined to Oliver Cromwell's “New Model Army” in 1645. Unlike traditional Parliamentarian Colors, The Light Horse carried an Orange Field, bordered in Checked White. A Central Banneroll (also in White), bore the Motto “With God and My Right”. The Units Commander, Robert Devereux - the oldest Son of the First Earl of Essex (also a Robert). He was the “Companion” of Queen Elizabeth I and later a professed Traitor (who was executed for an attempted Coup against her). 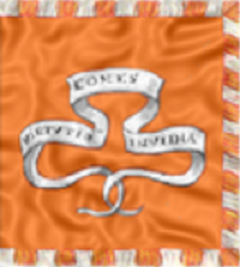