These US classifications of artillery pieces denoted any piece (mostly Coastal Defense), that used a compressed air method to fire a projectile, rather than gunpowder. Used briefly in the mid-1880s, Dynamite Guns were developed due to the high accidental explosion rates with large caliber guns. Often destroying expensive barrels (and killing or injuring the crew). Compressor engines were attached to the breach of the barrel. Upon loading of the shell, the barrel was “capped” or sealed. The resulting build up of air pressure (when released) – caused the shell to fire. The 2 popular models made were The Zalinski and The Sims-Dudley Guns. Several versions were deployed with The US Navy – most notably those on the USS “Vesuvius”. However, as a result of Compressed Projectile Release, a huge loss of accuracy was soon seen. By 1900, and the advent of more “stable” large caliber shells – Dynamite Guns became extinct. 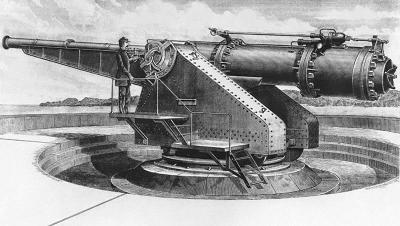