A Dutch Ship-of-The Line, “Provincien” was launched in 1665 from Rotterdam. As Flagship of The Dutch Navy, “Provincien” was 1,600 tons displaced and stood 50 feet (beam). She was an impressive 155-feet long. She consisted on three-decks, and carried over 60-cannon of various poundage and caliber. “Provincien” was an important part of Dutch Naval defenses during The Anglo-Dutch War. She was retrofitted with an additional 30 guns (bringing her up to 90) – in the 1680s. She was never sunk or seriously damaged in battle due to her immense size and strength. She was declared unfit in 1694 and due to cost overides – it was decided to break her up rather that retrofit her yet again. Several reproductions of “Provincien” have been reproduced in the 20th and 21st Centuries. 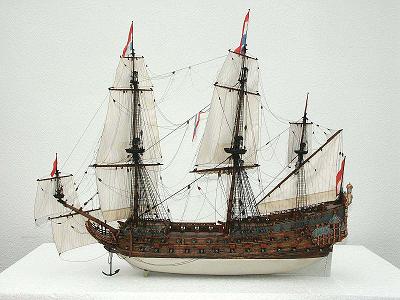