Built sometime in the early 15th Century, the Belgium Dulle Griet was a Medieval cannon made of wrought-iron. The barrel is 15 feet long and used 61 barrel rings installed along it's barrel (to assist with barrel integrity). It weights 16 tons and has a 15-inch barrel diameter. The Dulle Griet was capable of firing a 80-pound rounded stone shell up to 700 meters (at maximum elevation). Used during The Siege of Oudenaarde, the Dulle Griet was captured in battle. It was eventually returned to The City of Ghent in 1578. Painted red as an anti-rusting measure, it's original carriage system is unknown. It can be seen displayed at The Friday Market Square in Ghent, Germany 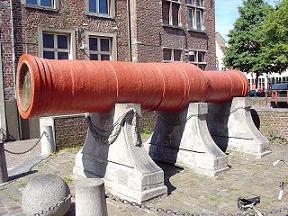