The practice of moving large Herds of Cattle or related Sustenance animals, is actually Centuries old. The practice was a major component however with America’s Westward Expansion of the late 1860s to 1880s. The need for Cattle was critical for overall survival when Settlers began their trek from The Mid-West to The Western Coast of The United States. Large Herds of Cattle (Angus, Long Horn etc), would be moved from Texas (and Mexico), were moved up North to places like Dodge City, Kansas – by a unique type of Man, known as a Drover. Traditionally, these were “out of work” Cowboys  (or Seasonal Workers), who made their incomes strictly on The Cattle Drives. Companies were often formed from the larger Cattle Owners, which recruited the same Workers seasonally.

A Drover led a hard life. They were tasked with managing the movement of a Cattle Herds of often many hundreds. Their journey could by many hundreds of miles, and take several months to achieve. A Drover had to be watchful for errant Cattle straying from a Herd. Every Head was worth money (and often a cut in pay). They had to also contend with Native American attacks and Outlawry.

A Drover used his own Horse, although feed was provided by The Company. He was also provided with three meals a day. This was actually an important facet to Droving. Cooks (known as “Cookies”), were often chosen for their culinary abilities. Despite myth and rumor, a Driver probably ate better than most. Although a Cattle Drives was fraught with danger, the end result was often worth the trouble. The often 12 to 10-hour days would equal large payoffs at the end of a Drive. After which, The Drover sought employment elsewhere for 3 to 4 months.

The Great Western Cattle Trail was the largest and last of The Great Drives of The American West. It is estimated that over 1 Million Head of Cattle were transported along this Trail between 1866 and 1886. With more and more Railway Lines being built, and affording better and faster forms of Cattle transportation, the need for the traditional Cattle Drives began to die out, as did the need for Drovers. Although small scale Drives continue Regionally, the days of The Great Drives were over by the 1890s. 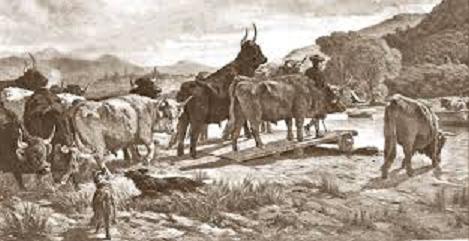