The ''Dreadnought''-Class of Warships were the early form of Battleship designed by most Navies of The World (1889-1905). Considered “Proto-Battleships”, many were still in service by the start of World War I (in the early years). The 1916 Naval Battle of Jutland (1916), was this Class of Warship's final use. They were credited with spurring the first “Modern” Arms Race between The Allied and Axis Powers. A typical Dreadnought ranged around 15 to 18,000 tons (displaced) and stood around 30 feet tall (beam). Constructed to have a basic “shallow” draught, (they sat low in the water). Heavily armored (roughly 2 to 4.5 inches of iron and steel), Dreadnoughts were armed with multiple types of Moderate to Heavy caliber cannon. Early experimentation with “Aero Plane Catapult” systems were tried (allowing a small Bi-Plane to be launched via a primitive tension launch system). These would not be as popular as later attempts. A Countries true Naval “Power” was often measured by it's number of Dreadnought Warships. They were critically slow and took time to “turn” in combat (serving really no more than a “Floating Artillery” Platform). Most of The Dreadnought Class of ships were replace by most World War I participants by 1916-17. One surviving Dreadnought (USS “Texas”), is currently a Museum Ship in The State of Texas (US). 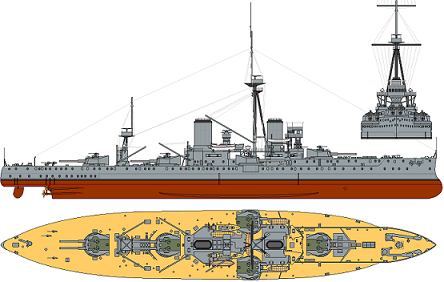