As we have seen with Medieval currency, by the 15th Century forward, coinage was more refined and often was composed of more previous metals. Gold and Silver were the two most common forms of currency for Regional and International debts and purchases. As such large amounts were transported via Oceans in Sailing Ships. This also meant the "draw" of such riches fell to the attention of those "Wolves of The Sea" - The Pirate. Spain was a prolific Minter of coinage. The Doubloon (or Doblon), was among it's first internationally recognized coins. Produced in Spain, Mexico and Peru, The Doubloon was 6.67 grams of gold metal. It was first produced in 1537. The Doubloon was also highly noted for it's bright golden sheen. Minted in 2, 4 and 8 denominations, Regionally they were called "The Pistole". It was England who would first coin the term "Doubloon" or "double gold". Transported back and forth from The New World to Europe meant hundreds of millions of dollars ready for the taking by an enterprising Pirate or Privateering Crews (which they did). The Doubloon was minted until 1859. 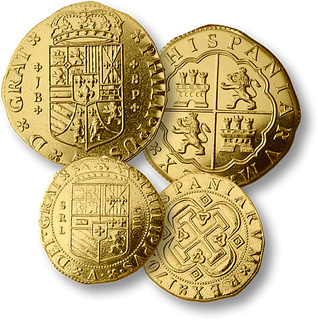