Developed in Spain around the 14th Century, it was designed off of the military apparel The Hauberk. Buttoned and form fitted to shape, The Doublet became the height of fashion in the mid- to Late Middle Ages and into The Renaissance Period. In pattern, they formed a deep “V” front on the Wearer. Often heavily padded, The Doublet was designed to give “shape and form” to it's Wearer. It was made in various colors. More expensive and quality Doublets were worn by Nobility with the “cheaper” versions being created for more Common people. The Doublet was seen as the standard in dress for a Man for almost 300 years. A female version was also made (used for Out of doors activities, such as Hunting and Falconry). 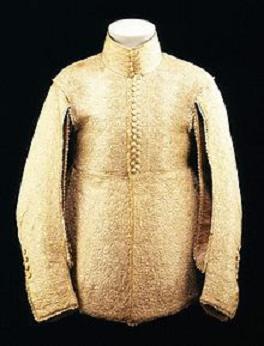