Dora DuFran (aka Amy Helen Dorothy Bolshaw) was born in England in 1868. While few would recognize Her name, it was DuFran who coined the infamous term ''Cathouse'' (or Brothel). DuFran and Her Family came to America in 1876 and settled in Nebraska Territory, intent on ''capturing'' the ''Immigrant's Dream'' of ''fame and fortune''. The Family was only mildly successful as Farmers. However, DuFran had a natural ''gift'' in Her Beauty. Just why she was forced to turn to Prostitution at 14.

Becoming a ''Dance Hall Girl'' when Gold was discovered in The ''Black Hills'' of South Dakota. The massive run by Prospectors, Miners, and of course ''Bad Men'', also meant that mass amounts of monies could be found. DuFran moved to the Mining ''Town'' of Deadwood. Tapping into ''Man's Vices'' early, DuFran opened The Town's first Brothel. Du Fran was very particular in ''who'' She hired. Only the most ''prettiest of girls'' was hired. Further, DuFran maintained a strict set of rules for Her girls to live and work by.

Investing her income into buying more ''Cathouses'', often these establishments featured food, socializing and dancing. Unlike the traditional Brothel Dora spent huge sums of monies to import fine furniture, paintings and of course – only the best alcohol. Dora (ever the businesswoman, invested in more establishments in Town (such as Hotels, Stores etc).

Spreading out her ''Brand'' to nearby Mining Colonies turned ''Boom Town'', DuFran would become one of the most successful ''Madams'' of The American West. She would marry a noted local Gambler (Joseph DuFran). It was DuFran who became a friend of Martha Jane Canary (aka ''Calamity Jane'') and published on of the first books about Her ''legend''. Leaving ''The Business'' in the late 1890s, DuFran and Her Husband lived an opulent life. She died of heart failure in 1934. 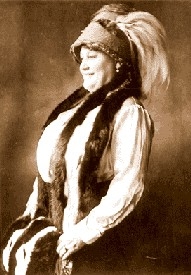