While we have seen, The Ancient Legions of Rome began to develop the premise of Cavalry Warfare in 3rd Century BC. While Rome never used Cavalry in the more conventional sense of Mounted Warriors, they adopted a tactic more akin to The Dragoon or Mounted Infantry of many Centuries later. Roman Cavalrymen were a form of Mounted Soldier, who used horse to move from one point to another on a battlefield. They would dismount and fight on foot.

While some traditional ''Cavalry Battles'' (from horses) were fought, these were few and far between. Most of these engagements were in the far of Provinces and Regions pending Roman Occupation.

While most Roman Cavalry were Ranked (as in the Legion), The Principal used to command was known as The Decurion. Undergoing many changes in responsibility, by The Imperial Period, The Decurion commanded 30 Horse (Men). This was known as a ''Squadron''. Most advanced thru The Ranks, first as volunteer Cavalrymen with many years of experience, to a position with ''command responsibility''.

Most of The Decurion Class were also NOT from wealthy families (but had been able to advance their family name and fortune as a result of their status as Decurion). Thus, a Decurion was neither Officer nor Non-Commissioned Officer, but a Position in-between both.

During the earlier Republican Period of Roman History, most Decurions were of the ''lessor'' Aristocratic Class, who often took the Position as a means of ''upward mobility'' in Roman Society. This was especially true in One getting ''noticed'' by a higher much Nobler ''Patron'' Officer. 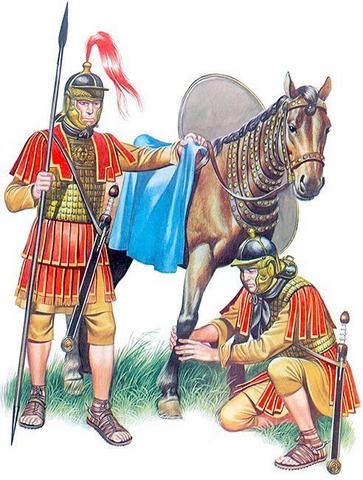