NOT Disney's "Captain Barbossa", but Stevenson (again) and his Novel "Treasure Island" - The oft repeated "Pirate Threat" of "Dead Men Tell No Tales", fits squarely next to the "Pirate Accent" and "The Hook". Meant to impart the fate of betrayal or informing against another Pirate, the ultimate punishment was - DEATH.

Attributed to Stevenson's character "Long John Silver" (great name for a Pirate), there is actually a "kernel" of truth associated with the threat. Pirate Captain Edward Low was one of the worst in terms of living up to the perceived image of a "ruthless" Pirate. He was well known for killing his captives and inflicting many of the tortures we gave read about. He was known for a certain "catch phrase" to his crew that was used to signal the death of captives, "Dead Cat's Don't Mew, You Know What To Do!" This may have been the original "genesis" for "Dead Men Tell No Tales". 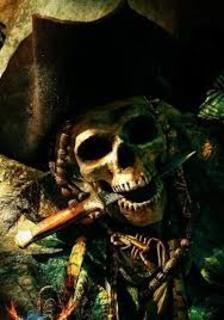