Born in Fulton, Illinois in 1854 – Dave Rudabaugh (aka ''Dirty Dave'') is not as well known as other more infamous American Western Outlaws. But He did enter History for several reasons. As a boy, Dave – who was said to be close to His father – lost Him when He was killed during The American Civil War of 1861, fighting for The Union. His Family would move to Ohio and later Kansas. It was in the 1870s that Dave would begin His criminal vocation – as a Cattle Rustler. Making friends with two other Outlaws, Dave formed a Gang known locally as ''The Trio''. In addition to stealing Cattle, Dave and His Gang would begin to rob stagecoaches and even be suspected in the death of several Cattle Ranchers. In an oft disputed tale by Western Historians, Dave's claim to fame was in Texas, when He met a young John Henry ''Doc'' Holiday. Holiday (at the time), was a noted card gambler. In exchange for ''teaching'' Dave the ''tricks of the trade'', Dave supposedly ''taught'' Doc Holiday ''how to shoot'' (making Him one of the deadliest in Western History).

After robbing The Santa Fe Railroad projects Office outside of Dodge City, Kansas n- Dave and His Trio ran afoul of Marshal Wyatt Earp. Earp received an arrest warrant (based on a good tip – perhaps even from Holiday), that Dave was responsible. And while Earp ''missed His Mark'' to arrest Dave (by scant minutes of fleeing, it was said), a telegram to another local Marshal – Bartholomew ''Bat'' Masterson, would lead to Dave's capture. But Dave's loyalty to His Gang versus Dave staying out of jail was not. Dave turned testimony against the others n His fold in exchange for His freedom. Dave's plea was taken by The Court and Dave saw freedom. Dave was then hired by The Santa Fe Railroad (along with other well-known Gunmen) to fight a rival Rail agency, over property right-of-way claims (The ''Railroad Wars'' which had unofficially begun in 1864 and would last until 1912).

Dave later would be associated with several criminal gangs, even having ''worked with'' Billy The Kid at one point. His skill with a gun was well known throughout The West. When The Kid was killed in 1880 by Sheriff Pat Garrett – Billy's Gang (including Dave) was arrested and jailed. Being released due to lack of evidence, Dave made his way into Arizona Territory, where – it is said – He joined the infamous Cochise County Cowboy Gang (noted for members who participated in The Gunfight at The OK Coral in Tombstone, Arizona). As a revenge ''strike'' for killing three of The Gang's own, a partially successful assassination of Wyatt Earp's Brothers, placed Dave as one of the probable ''doers''.

As is known, The Earp Vendetta Ride of the 1880s broke up the influence of The Cowboys Gang, forcing Dave to run farther South, into Mexico. He went back to His life of card cheat (with the occasional side robbery). However, Dave's luck ran out in 1886, when He was ''called out'' during a game. He was supposedly hacked to death with a machete and His head placed on a pole as a ''warning'' to other Cheats. Dave's enduring nickname of ''Dirty Dave'' has always caused debate. It is claimed that Dave hated water, as as such refused to bathe. Some however, cite that it was Dave's ability to betray His friends to save His own ''skin'' was a more closer meaning. 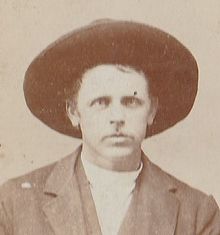