Another of the Medieval "Superguns", The Dardenelles Cannon was a cast iron, large howiter-type cannon. It weights 8-tons. Her bore diameter was 41-inches. Her barrel was over 30 feet long with a maximum effective range (at highest elevation), of 600 to 800 meters (using a 75-pound shell). This has been debated due to no "modern" reproduction has been made to accurately assess the weapon. Commissioned by the famed Sultan Mehmed II, The Dardenelle Gun (it had no Arabic name), was first used at The Siege of Constantinople in 1453 (with great effect). Amazingly though, this weapon was still in service some 350 years later. During The Anglo-Turkish War of 1807, it shelled the British Navy! In 1866, the Turkish Government gave the now named "Dardenelle Gun" as a gift to Queen Victoria. Kept at The Royal Armory and Tower of London for a time - it was finally moved to Fort Nelson, Hampshire, England. 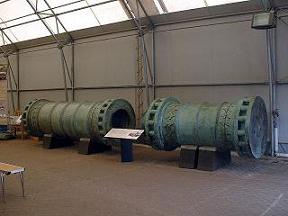