Johnson was born in Bristol, England in 1629. His nicknames of “The Juggernaut” and “Johnson The Terror” were well deserved from The Spanish. John was a Merchant Seaman when his ship was captured by a Spanish Warship in 1654. Treated harshly, she was said to have been sent as “slave labor” to Africa. Eventually escaping – Johnson was taken in by a Dutch Privateer. He made his way farther into The Caribbean, and took his “revenge” against ANY Spanish vessel he came across (regardless if they surrendered without a fight or not). He commanded his own ship in 1660 and attacked many Spanish settlements in and around Panama. It was said he “netted” over 1.5 Million (USD). The Spanish had a $25,000 bounty on his head! In 1666, The Governor of Havana (Cuba), recruited a 200-man garrison to “defend” his City and placed an additional $15,000 (USD) bounty. This infuriated Johnson so, that he raided Havana and captured the garrison (The Governor escaped). John had the entire 200 man Force beheaded (and set in barrels to The Governor!) In 1675, Johnson's “luck” ran out. Still, - he went out as a “Pirate”. His 4 ships engaged a larger Spanish War Fleet. After several hours of battle, Johnson was captured (with 17 wounds!). Taken to Havana, he was nursed back to health – and later hung in the Public Square! 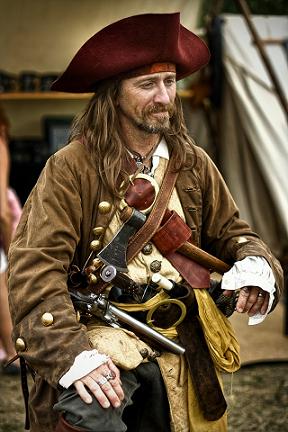