Found in Northern Denmark and portions of German, ''Danevirke'' (Danework), was a 7th Century AD form of field fortification, associated with Norse and related Cultures. These were permanent constructs with a style used by The Danish Military until the 1950s. The style involved various forms of Danevirke, depending on the region and ''what'' was needed. Accordingly both size and length were different as well. Made of both Earth, crushed rock and wood, Danevirke was used along waterways and roads as a means of using natural features as a form of extended defense.

Most elevations were 8 to 15 feet in high. These foundations may or may not be incorporated with wooden brace foundation, inserted into the foundation – and serving as a form of Shield Wall. Some variations also used a form of Hoarding Structure on the top as a means of protection for Defense Forces. It could take many months to erect such constructs, with some (few actually) maintained on a continual basis (erected for War). Effective, Danevirke is seen as one of the earliest forms of ''temporary'' erected field defenses that needed no special skills to erect. 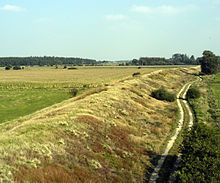