The Czech CZ vz 27 was a .32 Caliber Automatic Pistol which, while produced for The Czech Army (1938), saw more use with The German Army when they occupied The Country. The Pistol was a popular firearm with German Officers, often over their issued Walther. Weighing 24-onces, The vz27 was 6-inches long. It was a Blowback, gas operated handgun which was fed by an 8-round ammunition clip. It had a maximum effective range of 200-meters. Over 600,000 Models were produced and eventually used by Police Forces through Central and Northern Europe well into the 1950s. 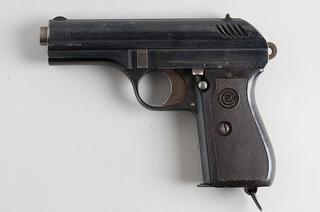