As with most European Nations that experienced the horrors of World War I, Czechoslovakia too saw the need to produce Armored Fighting Fights locally. While this Nations purchased most of their Military Vehicles from other Countries (France, Germany and England), The Kolohousenka was that Nations first ''home-made'' such Tank. The first prototypes were seen in 1923. The Tank is often Classed into a type of Armored Fighting or Infantry Support Vehicle, as opposed to a ''true'' Tank''.

Weighing 9-tons, The Kolohousenka was 15-feet long with a width of 8-feet. They stood 8.5-feet tall and supported a Crew of (2). Plating was between 1 and 2-inches throughout. Unique to other Tanks, The Kolohousenka had both a Dual Track as well as (4) Wheeled Drive System, allowing the vehicle to operate on both rough and even (road) terrains. Several different types of 50-HP Gas Engines were used. The Primary armament was a Single, 37mm Main Gun, which was supported by Twin 7.92mm Machine Guns.

Several Models were sold to The Soviet Union, with many being found still in use by the early stages of World War II (1939). However, most were well obsolete by this time, with none surviving The War (1945). 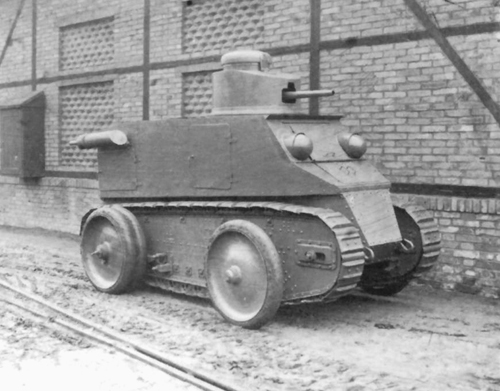