An innovation and major step in the evolution of Firearms and Ammunition, The Cylindro-Conoidal was the invention of British Army Officer Captain John Norton. His design in 1832 was based on observations he had during his Postings in India. Local Natives who used Blowguns, were able to achieve great  distances with a single breath. Upon closer examination, Norton noted that the Darts were fitted with a gummy organic plant material (Pith). This caused a form fitting seal in the Blow Tube, thus allowing no escape of air.

Applying this theory to soft Lead Rounds, he devised a conical shaped Bullet with a hollowed base. With expansion of the Lead Round in the Barrel of a Rifle, it was found that no errant gas escaped from around the projectile. This increased range. In 1836, designers applied a wooden plug at the end of the hollow, which further stabilized the Round.

The British Army was not interested in The Cylindro-Conoidal. However, the design came to the attention of French Army Officers in 1848 and again in 1849 – when Claude Minie patented his “Minie Ball” and later Rifle. These were the forerunner of The Rifled Barrel which would forever do away with The Smoothbore weapons of the day. 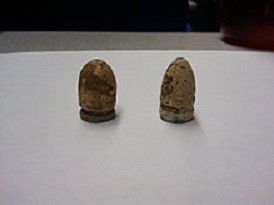