Rivaling the famed Confederate Raider/Blockade Runner “Alabama”, The CSS “Shenandoah” was one of the most feared Raiders operated by The Confederate States Navy during the final years of The American Civil War. Built in Scotland in 1863, she was originally named The “Sea King”. Originally targeted for The British Royal Navy as a Troop Transport Vessel, they declined. Builders again tried to sell her to The East Indian Company as a “Tea Runner”, but they too declined. Finally, The Confederate Government purchased her. Sailed to Liverpool, England, she was fitted with Cannon and crewed. “Sea King” was renamed The CSS "Shenandoah".

Displacing 1,160-tons, she was 210-feet long and stood 33-feet tall. Classed as an “Extreme Clipper”, she used both a “Full Rig” Sail System and an Inglis 200-HP Steam Engine. “Shenandoah” could achieve 25-mph. Armed with (4) 8-inch Cannon, (2) 32-Pounders and (2) 12-Pound Whitworth Rifled Guns, she crewed 110 Men. “Shenandoah” was Captained by James Waddell. “Shenandoah” would enter into History in two very different ways. The first, she was the only Confederate Ship to circumnavigate The World. Preferring to “hunt” in The Pacific Ocean, she was a scourge to Northern Whalers and Merchant Ships  she took 38 Ships and 5.5 Million  (USD) in Prizes.

Her other claim to fame came with the end of The Civil War. The American Civil War ended in April of 1865, with the Main Confederate Army under General Robert E. Lee’s surrender. Several weeks after that General Joe Johnson fid the same in North Carolina. Finally, General Kirby Smith surrendered his small Texas Force after an equally small Battle. However,  communications were not the best in the mid-19th Century. Ironically, “Shenandoah” never received word The War was over. She continued her “hunting”.

Even with captured Newspapers, Captain Waddell felt it was a trick. It was not until November of 1865, that a British Vessel was able to convince him it was. He ordered The Confederate Flag lowered and furled. His Guns were unmounted and The “Shenandoah” proceeded down The Mersey River to Liverpool. Unfortunately, no Pilot would navigate the Ship without a Flag. Waddell ordered The Confederate Flag flown again. He sailed “Shenandoah” into Port and duly surrendered to The Royal Navy. Thus was the last Confederate Flag to fly officially.

After much legal wrangling between Britain and The United States regarding the disposition of her Crew and Ship, The Crew was turned over to The Federal Navy. They were transported back to The United States and paroled. Many  would go on to other careers at Sea, others not. The fate of the Ship “Shenandoah” was that she was sold to The Emir of Zanzibar. Serving in his Fleet as The “Emir Majidi”. During a storm at Sea in 1872, she crashed into shore severely damaged. She was broken up for salvage. 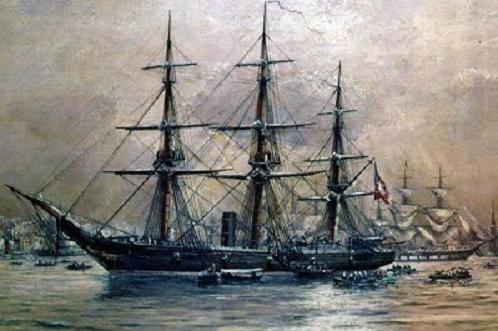