Originally a ''Rigged'' Steam Schooner of The Charles Morgan Shipping Line, The ''Governor Moore'' was launched in 1854 and ran Commerce between New York and Charleston, South Carolina. At the start of The American Civil War (1861-1865), She was commandeered in Charleston by Confederate Forces and pressed into War service as a Gunboat. The CSS ''Moore'' was very successful protecting Southern assets along The Carolina Coast against The Federal Naval Blockade. So much so, that She was sent to bolster Defenses at Mobile Bay, against Union Naval Admiral David Farragut's Invasion Force (1862). It was there that ''Moore'' was outmatched by a larger Union Warship. Having Her Bow completely shot away, ''Moore'' still did not sink (although 64 of Her Crew were said to have been killed instantly as a result). ''Sailed'' out of The Battle, ''Moore'' was blown up by survivors. The ''Governor Moore'' displaced over 1,200-tons and was 125-feet long with a Beam of 40-feet. Crewed (Wartime) by 75 Officers and Men, The ''Moore'' was fitted with Twin 32-Pdr. Cannon. 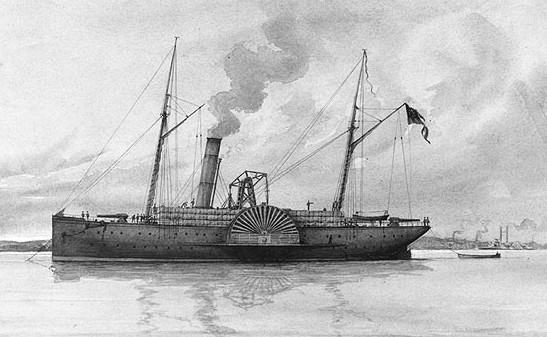