Perhaps as early as 1850, The Victorian Occupation of ''Cross Sweeper'' was quite a regular form of ''unofficial'' Vocation. The City of London was, during The Era – a bustling hub of Commerce, Hawkers, Craftsmen and Labor. Thousands lived and died in the oft overcrowded Region. The City had no real form of Public Sanitation Department (as is found in virtually ANY City or Town today). Mostly, trash (from cloth, food to human and animal waste), regularly piled up on London side streets. Although in the more affluent Sections, trash was gathered up by Servants and ''sent'' to City Cesspits (as it had been so for hundreds of years). Unfortunately, most of these were no longer in existence. They were simply dumped into the poorer neighborhoods or the River Thames itself!

The Residents would of course, scrape up this debris into large piles, but this was often futile work. It was so foul, people (especially the Wealthy and Middle Class who had business there) – could not even walk on streets or sidewalks. Enter the thrifty, self-created position of Cross Sweeper. Occupied by elderly Men or those physically incapable of traditional physical work due to infirmity, these people would use large brooms (all of which were homemade affairs) to carve out a path to those who wished to cross a street or sidewalk (not wishing to step into excrement or related ''debris''. A Crosser would pay a ''few Coppers'' (money) for the privilege. In time, even children too worked as ''Cross Sweepers'' as a means of making a few coins (in a time when everyone in a Family had to work to eat).

Seen as a ''necessary joke'' to The Wealthy and even derided by the Poor – Cross Sweeping was held in the same light as begging (seen as a very distasteful vocation in Victorian England). Still, Cross Sweeping was seen as necessary and would well continue unofficially until the turn of the 19th Century, when The City of London ''created''a Sanitation Department and legal Street Sweepers. 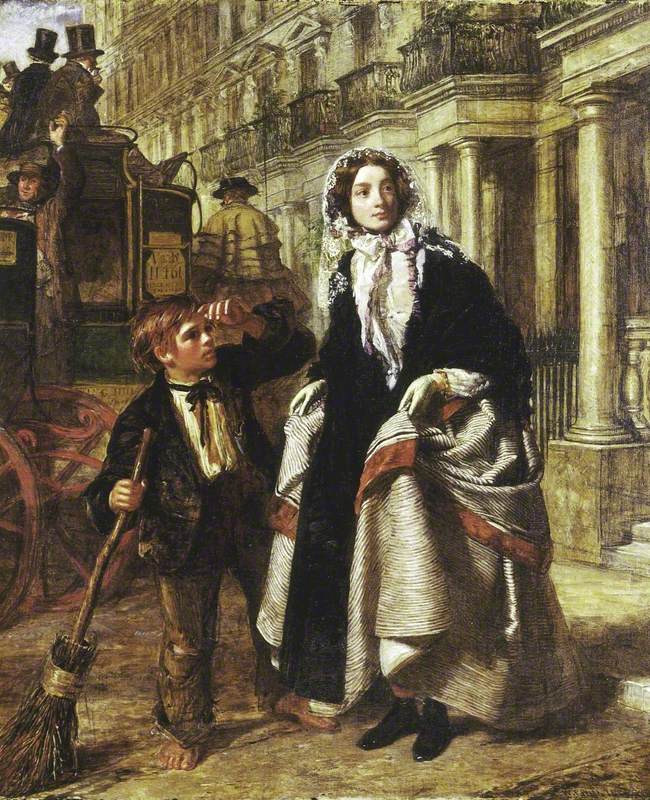