Believed to have been developed in 5th Century China, the variants of the Crossbow have been found (bronze components), as far back as the 2nd Century. Noted military tactician Sun Tzu talks about this weapon in his Treatsie "The Art of War". As the Crossbow relates to the Middle Ages, it appears at The Battle of Hastings (1066) and continues into the 15th Century. Although not having the same "cyclic rate" as the Longbow - in terms of "missiles" fired, the weapon utilized greater kinetic energy. This was needed due to the Crossbow's ability to project a steel bolt or shaft (sharped or blunted). The weapon could produce astonishing range in some cases. Obviously, this weapon was a curse to armored troops.

Although composition materials greatly varied, normally a strong composite wood material was needed. Shaped into what would eventually be defined as "a rifle or stock shape". Grooved through it's main frame and designed to be fitted with a gear and pulley device, the cross beam or bow bar was added. The material composition of the cross bar was essentially the same as a standard bow (even in terms of manufacture). The cross bar needed to have similar tensile strength.
Bow strings made of wiring or reinforced "cat-gut" were employed on the cross bar. The device was deployed (accomplished by a mechanical pulling device, crank or simply by hand). Several variations would be made with highly intricate gear and pulley systems. The stringing was next pulled backwards and "locked" into a hook, latch or groove. The shortness of the overall weapon, coupled with the compressed force of energy on the bow id the weapons real design genius. After a suitable metal rod, bolt or like missile was placed into the grooving path, release was accomplished through a primitive (but effective) triggering release latch (or similar form).

Training took about a week, according to documents and accounts of the day. Truthfully, the Crossbow would fit neatly into the realm of psychological weapons used against an enemy (particularly armored troops, now no longer invincible). Unfortunately, the advent of the firearm (Fire and Matchlock), would replace these weapons on European battlefields. Many examples of the weapon were embellished as "military art" (although these examples were no doubt used for ceremonial or guard occasions.) 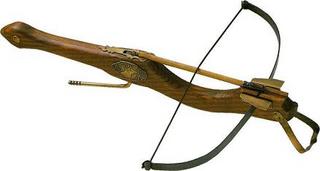