While The ''Cronje'' Hat origin is claimed (in part) by many Military ''Militia'' throughout The World, it is more easily recognized as a part of the uniform worn by The Irish Volunteer Army during The Easter Uprising of 1916. The ''Rising'' (as it was locally known), was against British Government and perceived forced occupation of Northern Ireland. Southern Irish Forces formed a makeshift Army and developed their own uniform. This was based (in part) on the basic British Army Uniform of World War I. However, many Militia (or Brigades, as The Irish Volunteers called themselves), pieced together whatever they could find or ''procure'' – to create their uniforms. A standard among them all was The Cronje, or ''Slouch Hat''. A popular form of Uniform headgear during The American Civil war of 1861-1865, most Slouches (meaning ''formless'' or ''sloppy''), were in reality hard, Felt constructed Hats which did not hold up well to the constant exposure to all sorts of elements. Hence the term ''Slouch''.

In a related vein, some Historians point to the term ''Cronje'' as being related to Dutch/Boer Commander Piet Cronje – who organized The Boer Kommandos (Boer Mounted Infantry), who fought against The British during several Wars in South Africa. The standard headgear was simple Men's Hats which slowly became worn and out of shape (again, the term ''Slouches''). Also known as a ''Brimmer'' for the often large brims designed to keep The Sun of of one's head and neck, The Irish Cronje became an iconic image to The World, in relation to The Irish Volunteer Army in 1916.

Either Black, Tan or Green was seen as a typical uniform color. Many were ''pinned'' on the sides (as was popular – or known as ''Bush Style'' (again another reference to The Hat's ''African'' roots. Many Irish Volunteers attached Cap Devices (identifying their Brigades). Often feathers or other ''patriotic attachments'' were added. The Cronje Hat (in part) would also be adopted by Australian and New Zealand Armies – and was seen in used widely during both World Wars. 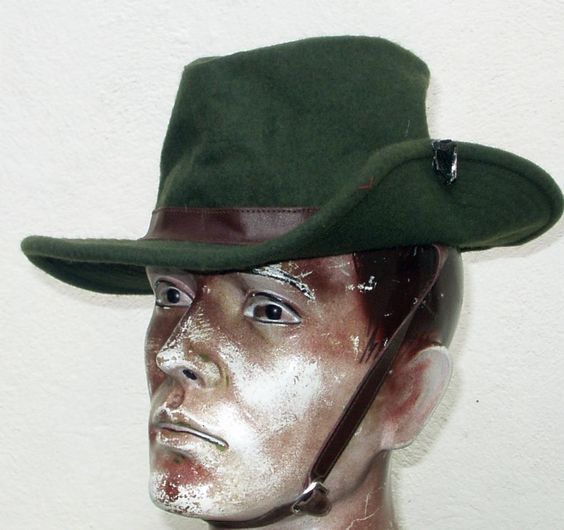