First used in 1643, The “Pocket Bible” was devised by English Civil War Leader Oliver Cromwell. Devoutly religious, Cromwell used discipline and religion to instill values and “fighting spirit” into his Army. To urge the “tyranny” of King Charles I, Cromwell and his Rebels needed to maintain strict discipline when engaging in the better trained and equipped Royalist Army. The Pocket Bible was iussed to each soldier. Not only did it contain an abridged Protestant version of The Bible (using examples of triumphing over evil and being “brave in battle” against God's enemies) – but Cromwell wisely inserted training and discipline antidotes as well. A few examples were as follows:

An exacting regulation for the carrying of the Pocket Bible was also put in place. When not in use, The Book was placed on the inside waistcoat pocket (over the heart). This was the only type of carrying allowed (with severe disciple applied if one did not!). An English Civil War “legend” tells of soldier's who survived gunshots when bullets fired at them accidentally struck their Pocket Bible (thus saving their life). It was said (by Cromwell) – that he lost no battles when his soldiers faithfully “wore their Bibles”. The Pocket Bible proved to be an effect “training and morale” tool for The Parliamentarian Army. 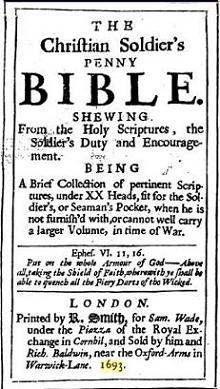