His Oglala Sioux name was “Thasunke Witko” (with other nicknames such as “Worm” and “Curly”).  American History will know him by the name “Crazy Horse”, Hereditary War Chief of The Oglala Sioux of The Great Plains. Perhaps no other Native American Leader caused more fear to “The Whites” from 1866 to 1877. His birthdate is thought to be around 1842. Described as a “quiet and withdrawn” boy, “Curly” as he was known to his Mother was a typical Sioux and grew strong and tall. As a young man he learned to mistrust “The Whites”, seen as invades into their Ancestral lands. Unlike most Native American Tribes, The Sioux had not yet been forced off their Territories. But that was soon to change with one chance encounter.

Captain William Fetterman was a brash and boastful young man who claimed that with a scant Company of Soldiers, he could conquer The Sioux. Hostilities had begun when The US Army tried to at first negotiate a relocation from The Sioux and they refused. Allying themselves with The Cheyenne, Lakota and Minneconjou Tribes, The Oglala fought and defeated The 3rd US Cavalry. The Army felt justified in actions against The Sioux. Fetterman unwisely, threw prudent Military theory to “the wind”. He and his Company of Cavalry would meet a gory end in December  of 1866.

Much has been made of how Crazy Horse got his name. It was said that before The Fetterman Massacre, he had a dream. Dreams, and their interpretations were very much a part of Sioux Culture. Crazy Horse said that in his dream he rode a Pony, that was “quick and fractious”, passing through great groups of his People. The Horse was painted in Hail drops and Lighting Bolts. His People were jealous of him, so they tried to pull him down – but couldn’t. Next, he found himself in a hail of bullets and arrows, none of which could harm him – as long as he rode this “mystic” Pony. Hence the name Crazy Horse was “born”. Telling his story to a Medicine Man for interpretation, he was given a smooth black stone to wear from his ear. Then came the victory of The Hundred in The Hand (as The Sioux called The Fetterman Massacre). Crazy Horse was honored with the Title of “Ogle Tanka” (War Leader) of The Oglala.

With The Massacre, hostilities rose in earnest. General George Crook unleashed a Campaign against The Sioux. This was known as The Great Sioux War. The first major Army engagement was The Battle of Rosebud Creek, Montana (1876). Beaten by Crazy Horse, The Army tried again with an even more foolish assault at The Little Big Horn. This time an entire Command was annihilated. And with this “loss”, the full and systematic destruction of The Sioux began. Realizing The Tribe had to now remain on the move, Leaders such as Sitting Bull kept The Sioux moving North, hoping to make it to Canada (where the Army could not follow and “Whites” into Canada. Crazy Horse and his Braves continued to fight. But attrition could not replace Sioux losses (as The “Whites” could).

Unable to continue, Crazy Horse and his now greatly diminished Band, surrendered at Fort Robinson, Nebraska Territory in 1877. The Army oddly treated Crazy Horse with more “honor” and fair play than any other Native American. But his celebrity was not appreciated by some Sioux, who wanted Crazy Horse to fight on. He settled into life outside The Fort walls. In The North, Chief Joseph of The Nez Perce Tribe were quite successful in evading The Army, and were among the few Tribes still capable of mounting a resistance. Many felt Crazy Horse could be coaxed to leave captivity and join Chief Joseph. So in fear of this, The Army took Crazy Horse into “physical” custody – planning to move him farther East  (despite the fact that Crazy Horse assured them he would not join the fight).

The death of Crazy Horse is still debated by many Historians. The Government cites it was an accident. Most point to Assassination. Guarded by Native American Tribal Police Guards (Indians who had joined up with The US Army to enforce The Law), Crazy Horse and other of his Lieutenants, were being taken from their Cells. A fight ensued, within seconds – Crazy Horse was Bayoneted in the back. He died later that night in 1877. Crazy Horses Parents were allowed to take his body . He was buried in the traditional raised  (Sky Scaffold) style. Several months later, Sioux removed it to an undisclosed place. There are 4 possible locations, it is speculated. His remains are still unknown.

Crazy Horse was an enigmatic figure to both The Sioux and Americans. Lionized by both sides, his death did serve as a rallying point of sorts. Giving them hope that his “Spirit” would return with other of The Sioux’s Great Warriors to defend their People – with the revival of The Ghost Dance. Perhaps his battle cry of “Hoka Hey” (“It Is A Good Day To Die”),  was more prophetic than Crazy Horse thought. 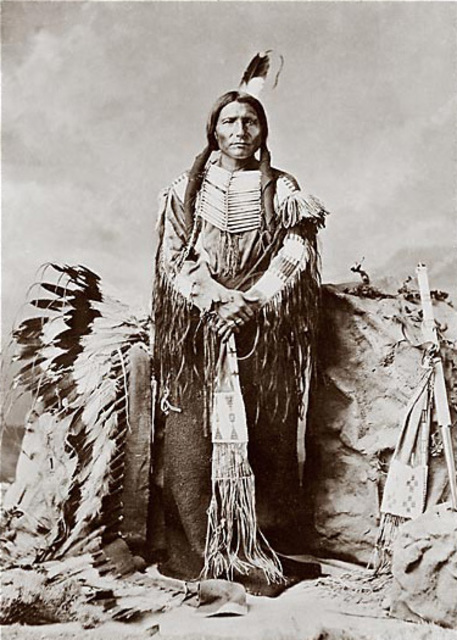