Iconic in their appearance, "Crakows" were a form of footwear noted for their long and pointed toes. In Europe (as a whole), they were referred to as Poulaines. Originating in Krakow, Poland - latter French term "Poulaine" is thought to mean "Of The Polish fashion", derived from the long toe points, not the shoe in general. Pointed shoes can be traced to the 12th Century, with the elongated "Crakow" being seen in the 15th Century. Both Men and later Women wore a form.

Made of leather or reinforced linen, Crakows were stuffed with cloth or straw to maintain their shape. They were worn as slippers and were not tied. Later in their evolution, people began to tie the toes upward, securing them with ribbons.  After 1480, Crakows fell out of favor and fashion. They have been erroneously called "Jester Shoes". Although no doubt used by the Entertainers, Crakows were no doubt the only shoes used. 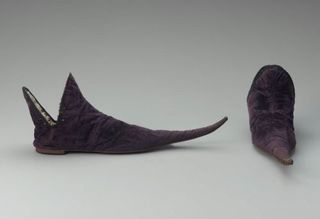