The Courser was a type of Medieval Horse, commonly breed and used as a type of War Horse. With examples of the Breed seen around the 12th Century AD, the exact origin and breeding stock is unclear (although some cite Middle Eastern sources brought to Europe by Crusaders). The name Courser comes from the ''fast gait'' that the horses had. Stout and strong, Coursers were ideal for Knights in often heavy armor and the animals ability to support this weight. The lighter clad Men-at-Arms class of Warriors were also known to use the Courser in battle. Despite their overall demand by Knights, Coursers (while expensive to breed and maintain), were still available for purchase by those who could afford them. The Courser was easily trained to withstand the sounds of warfare, and were quite intelligent. 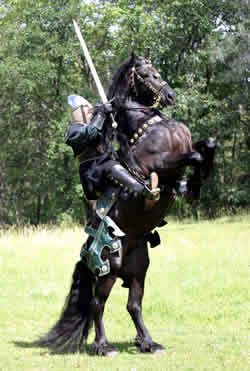