A Custom associated with War, “Coup” – or more appropriately known as “Counting Coup”, was a practice among The Plains Tribes of North America. These comprised of roughly 35 Native American Nations. In practice Centuries old, various Tribal names in their own languages came to be used. The application of the phrase “Coup” may have come from Tribal contact with early French Settlers and Trappers. By the 19th Century, most of The Plains Tribes used the word. In battle, it wad considered a high honor, if a Warrior wad able to get close enough to an Enemy to physically touch him (and bend remain uninjured). Thus was the original of Coup. The more times and Enemy was engaged this way, The greater the honor. Later, the relating is such bravery in battle around the Tribal Campfire, was known as “Counting Coup”.

While some Tribes had strict customs on Coup -often requiring the actual touching of an Enemy by the contesting Warriors hand, most Tribes used a “Coup Stick”. Although these varied by design and decoration, they were mostly carved wooden branches, 2-feet in length. Feathers and other “Tribal specific” embellishments were attached. With a Coup Stick, the contesting Warrior need only touch the stick to an Enemy. In The Lakota Sioux Tribe first example – a Feather could be worn to denote Coup. If by chance a Warrior was in fact injured, his Coup still counted  - but he would paint his Feather red. Other Tribes would add embellishments to The Coup Stick. Others would place notches on the stick as a way of keeping an accurate “count”. 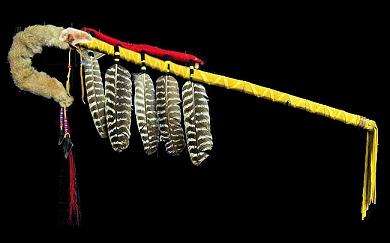