A type of 11th/12th Century siege weapon, The Coulliard was in the same family as The Trebuchet. It's primary difference was that it had a split counter-weight that passed on either side of the frame support (unlike the single counter-weight of a Trebuchet). Capable of being mobile (with wheels), the framing was made of wood. It was a crew served weapon (requiring 8 to 10 men to operate properly). The Coulliard had a range of 600 meters. A "good" crew could fire 10 projectiles per hour. Although not widely used, versions of The Coulliard were documented at The Siege of Orleans (1428-29). 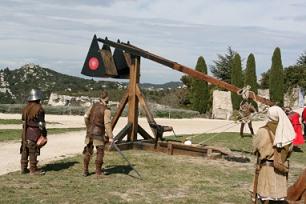