Installed on the Rear of larger Roman Warships, The Corvus was made of wood and iron. The Walkway featured handrails as well. Operated by a series of pullies and winches, the deployment tactic required the Ship to be turned rearward. Once The Corvus was lowered, hooks at the front (underneath), latched onto the Enemy deck. Roman Soldiers could then cross (Board).

The obvious deployment problems with The Corvus, was that an enemy could also Cross over onto The Roman Ship. Additionally, should the Enemy vessel sink, The Roman Ship risked going down with it as well. Still, The Corvus saw extended used along with The Harpax as primary Boarding Devices throughout the History of The Roman Navy. 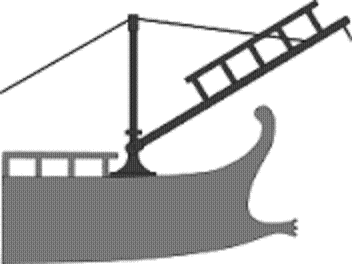