Located in Hunedoara, Romania - Corvin Castle (as it appears), began construction in 1446. Owned by John Hunyadi, he initially found a ruined Keep built by Charles I (Hungary), possibly 100 years earlier. Repairing and renovating it, it quickly began one of Europe's largest castles at one time. The land was given as a reward to Hunyadi for his father's services to King Sigismund (Hungary) - for heroism in battle (Hunyadi's father was also a member of The Order of The Dragon). Considered "Gothic" in style, it features strong defensive Towers - a large interior Courtyard and Draw Bridge.

In addition to being built on a mountain, the Zlasti River offers protection to the fortress. Corvin Castle also had a double set of defensive Curtain walls. It also had a Moated defense system protecting it's front. Well known in the region for it's "legendary" banquets and parties, Corvin also served as the administrative seat of local and regional Government. By 1480, most work on the castle had been completed. By the 17th Century, new owners had begun to renovate Corvin with more fanciful additions (creating it's "story book" appearance). Corvin Castle was never besieged.

Corvin Castle also has a legend to it concerning one Vlad III (aka Dracula). It was said that Vlad was imprisoned for 7 years at Corvin after he was deposed as Prince of Wallachia. Oddly, Vlad and Hunyadi made an alliance (despite the fact that Vlad had been responsible for the death of Hunyadi's father!). This alliance earned his freedom. Many more people speculate that Corvin Castle was the inspiration for Castle Dracula (as written by Bram Stoker). This legend had widely been dismissed. Romania considers Corvin Castle one of it's "7 Wonders". The castle may be visited. 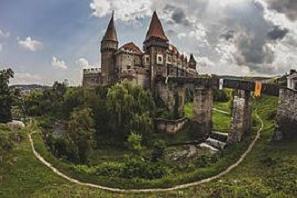