These were junior-grade officers of The Roman Army. Their main function was to call commands and to send salutes to and between officers in the field (similar in some form to a Bugler). To do this task, they used a Cornu. Not to be confused with an Aeneator (who was a professionally trained musician attached to a Roman Army and used a "C" shaped Buccina made of wood or bone). The actual Cornu instrument was made of brass and was "G" shaped. Worn over and under the shoulder, it had a less flanged shaped cup opening at it's end. Cornicen's always marched at the head of the Army (or Century Unit).

They would be flanked by the Signifer and the Imaginifer. Noted for the unusual style of wearing an animal hide over their helmets (and draped rearward). This hide could be a bear, wolf, lion or tiger. The genesis of this practice is obscure. It possibly goes back to the end of The Kingdom Period. It was assumed that the visage of such a wild beast would send fear into an enemy. Also, it was though (again in early Roman history), that the wearer would emulate the animals fierce nature. They were considered assistants to the Centurion (commander). They received double the pay a standard soldier would receive. Cornicen's were seen starting in The Republic Period and carrying onward to the 4th/5th Century A.D. 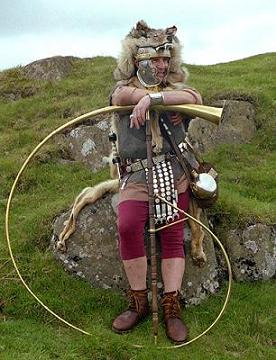