The Anti-War Democratic Northern political Party known as The Copperheads, were formed in 1860. They were radical, extreme Leftists who advocated the end of The Civil War by immediate peace with The Confederacy. In addition, they did not support The Abolitionist Movement (blaming The War on African Slaves and their supposed need for freedom). Copperheads also held US President Lincoln with disdain, even advocating his assassination. Copperheads helped raise monies for captured Rebel soldiers held in Prison (to be used for their escape).

Their name "Copperhead" was given to them by Congress, likening them to the deadly snake called The Copperhead. In reality, their name derived from their taking copper Liberty pennies (US coinage), and either cutting out the Liberty head (worn then as a pin), or wearing the coin as a necklace. This identified one Copperhead from another!
The Copperhead control also extended to The Media. They controlled The Chicago Times and used the Newspaper to publish inflammatory articles and discourses against Lincoln and The War. Their cartoons against Lincoln (portraying him as an ape), were well known.

Constantly watched with many arrested, eventually their Founder, Ohio Senator Clement Vallandingham - was brought up in treason charges and tried by Army Court. He was sentenced to exile in The Confederacy. They did not want him either and placed him under arrest.He escaped The South to Canada. Lincoln eventually allowed him to return - although heavily watched. The Copperheads tried to gain a control over the Senate with Lincoln's replacement - Andrew Johnson. They were unsuccessful. By 1868, their Party disbanded. 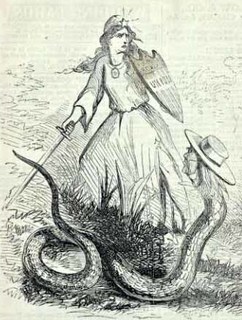