From The German “Kruper”, the Profession of Cooper was seen as an extremely important vocation in The Middle Ages. A Cooper was a maker of Barrels and other wooden storage containers. Both articles were needed for a variety needs. Barrels and related devices would serve in food preservation, trade and commerce for Centuries. In fact, Coopers occupied an important facet of Medieval Society as a result of their skills. Barrel Making evolved over many previous Centuries prior to The Middle Ages. Ceramic and Clay Pots or Amphres were the accepted means of storing food and liquids in much of The Ancient World. By the 12th Century, traditional Barrel Making began to come into in own Trade and later even Guild.

“Cooperage” encompasses not only Barrel Making, but that of Casks, buckets and related. In application, a Copper needed to possess Carpentry and rudimentary metal working skills. This was needed to manufacture the individual wooden slats and binding straps needed for basic Barrel construction. Barrel storage allowed for increase Trade both on Land and Sea – by virtue of being able to transport much more items. Barrels allowed for long term storage and preparation of alcoholic beverages and food preparation. With the advent of Gunpower, Barrels were important for not only storage of the powder, but aided in keeping it dry.

A variety of specialized tools were involved in Barrel Making. Although time would quickly discover better materials for construction other than wood – as wood better and more efficient manufacturing methods for containers and storage, the “Art” of Barrel Making and “Cooperage” is still very much alive. 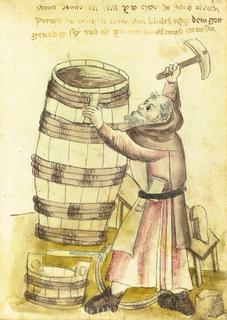