With the passing of The Confiscation Act of 1861 and the later Prohibitive Acts of 1862, Union Army Commanders were faced with a taxing problem. Thousands of ex-Southern Slaves were flooding into Army Camps everywhere in occupied Territories. The Union Army was not prepared (nor did they know how) – to care for or administer such a monumental feat. In many cases, Union Commanders simply did nothing. Enter Union Gen. Benjamin Butler. Recently made Commander of Union Ground Forces occupying The City and Port of New Orleans, Louisiana – it was Butler who came up with the initial idea of “Contraband Soldiers”. The theory was simple. Take able bodied Blackmen between the ages of 18 and 50, provide them with a very small level of training, provide them uniforms and weapons – and turn them loose upon The Confederacy. So as not to confuse them with “Regular Soldiers” (who were paid), “Contrabands” were issued bright Red Trousers. Nicknamed “Red Legs”, these “soldiers” were always commanded by a White Officer. They were mostly undisciplined and rowdy. Their “heyday” as Shock Troops would end with the Raid against The Town of Darien, Georgia (1863). After looting the Town, The Contrabands burned it and committed other “atrocities”. The Contrabands were disbanded soon after. Those who were of a more “patriotic” and “professional” nature, would join the many all-Black Regiments officially sanctioned by The US Army in 1863-64. 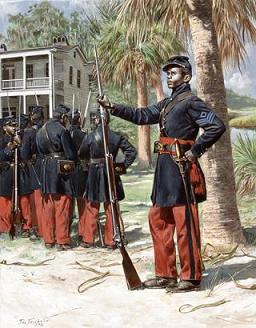