Organized as an “irregular” Mounted Cavalry Force of Confederates at the start of The American Civil War (1861-1865), the Regiment saw most of it's service in The Western Theater of The War. Recruited in Houston, Texas by wealthy Southern Planter Ben Terry. Lost early in the War, Terry's Ranger fell under command of his subordinate John Wharton. Used as “shock troops”. The Rangers gained a reputation as ruthless mounted fighters. Their colors, all black with white inverted Star, bore the name of the Regiment. Set against Union Gen. Sherman during The Atlanta Campaign, they made their final charge at The Battle of Bentonville, North Carolina. They made three successive charges in an attempt break through enemy lines. Half the Regiment was obliterated. 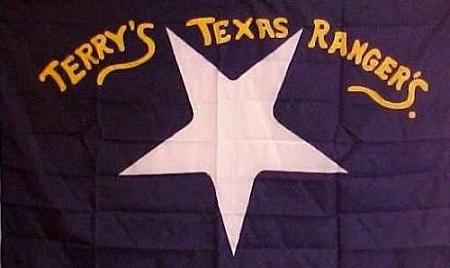