Possibly the first known design of a “Rebel” Flag, The first Convention of Succession was held in December of 1860. South Carolina declared herself “free” of The Union and an “Independent Nation”. This flag was know to have been used in that Convention and may have served as the idea for the official First National Flag (as well as The Battle Flag). Consisting of a Red field, a large elongated Blue Cross was set (covering the entirety of the flag). White Stars (representing all Southern States), were placed inside the Cross. In the Upper left Canton (in white), were the traditional symbols of South Carolina (The Crescent Moon and The Palm Tree). This flag was not known to have been carried in battle. 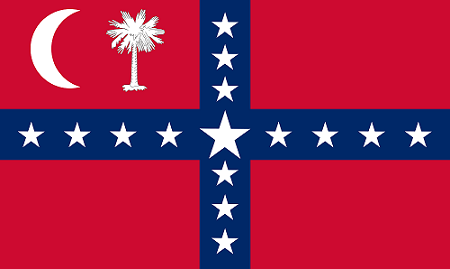