Infamous and daring, James Quantrill formed his own irregular Cavalry Unit around 1862 in the Kansas-Missouri Region, with the aim of harassing Federal Forces. Recruiting from some of the most cut throat and somewhat vicious men he could find (many were ex-Border War Ruffians and Outlaws) – his Raiders used direct and unorthodox tactics to achieve their ends. Although not sanctioned by The Confederate Government, they did not stop them either. The likes of Jesse James and The Cole-Younger Gangs all got their “start” riding for Quantrill. At one point, The Federal Government placed a 100,000 (USD) Bounty on his head. Originally, Quantrill used a solid Black Flag (similar to many Sea Pirates), to identify his Unit. It has been speculated that he may have used one with his last name (in red) – emblazoned on the center. Given to him as a gift, the girl who sewed it for him misspelled his name! Quantrill was killed in action in Kentucky in 1865. The flag was not officially seen from that point forward. 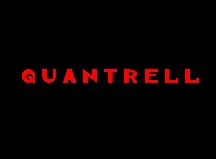