Formed in 1863, ''Mosby's Rangers'' were an Irregular American Confederate Cavalry Unit, raised to fight in The Civil War of 1861-1865. Part of The Partisan Ranger Act created by The Confederate States Congress, they were used to augment The Confederate Army's shrinking Cavalry Corps. As previously discussed, many Ranger Units were undisciplined horsemen who often were more of a liability, than a Reserve Force. Mosby's Force was an exception to this rule.

John Singleton Mosby was from Virginia and was an outspoken advocate against Secession. Regardless, when Virginia left The Union in 1861, he supported The South and enlisted as a Private with a Mounted Rifle Company. Performing well at The Battle of Bull Run and other smaller engagements, Mosby developed the idea to form his own Mounted Brigade. Somewhat ''well off'', when The Partisan Act was passed in 1862, he raised and equipped his own Company – named ''Mosby's Rangers'' – serving as a ''Colonel''.

Unlike other Partisan Units, Mosby kept a strict adherence to Army Regulations (Uniforms and discipline). His Force was so effective against Federal Forces that he and his Company (300 Men), were used as Scouts with General JEB Stuarts Cavalry Corps. with The Army of Northern Virginia.

Given a Full Commission in The Confederate Army, Mosby's Company was re-designated The 43rd Virginia Cavalry. Now numbering 800 Officer and Men, The Regiment undertook many major Raids into The North, often causing the major diverting of entire Union Armies to intercept him. It is estimated that his Regiment took roughly $50,000 USD in payroll wagons and uncounted millions in needed supplies.

Even with The War;s end in 1865, Mosby's Rangers still tried to maintain a guerrilla war. Refusing to surrender with Lee at Appomattox, Virginia, it was only when The Federal Government issued ''Wanted'' posters for he and his men, did he finally realize The War's ''continuance'' was over. His Regiment was one of the last land Units to formally surrender. 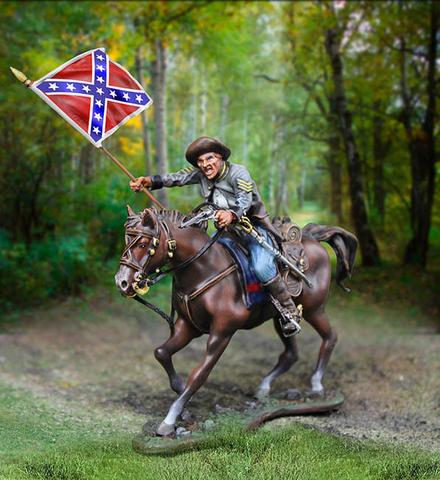