The State of Missouri was deeply divided by The American Civil War of 1861. A truce was enacted in 1861, by which those who supported The Union were protected by Federal Forces and those who chose to follow The Southern Confederacy were watched over by The State Militia. Soon, bullets replaced words between both sides. The State Guard was composed of Volunteers between the ages of 14 and 45 years. Originally numbering 5,000 enlistments, numbers estimate as many as 30,000 may have eventually joined the ranks. They were broken into 9 Districts (Divisions) and spread throughout The State. Later, many Guard Regiments served with Regular Confederate Forces, and fought in most of the major Battles of The Western Theater of War. Missouri did not have a State Flag during The War, it did adopt a War Flag of sorts, which was carried by state Guard Units until 1864-1865. This Flag was a Light Blue Field which featured a series of (24) Gold Stars over a state Seal with included a Federal Eagle, Bear and Crescent. This was flanked by Two Golden Bears in support. The state Motto was ''United We stand, Divided We Fall''. 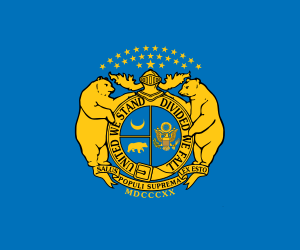