Kansas was a deeply divided Territory before (and during The American Civil War). Populated by both Pro-Southern and Pro-Northern people, Kansas was the staging ground for many bloody engagements (hence the nickname “Bleeding Kansas”). A portion of early Settlers moved from South Carolina. At the start of The Civil War (1861), they attempted to declare their County for The Confederacy. Creating a “Constitution”, they used this flag to promote their intentions. A red field took up the entirety of the flag. In it's center was a large 5-pointed star. Stitched (haphazardly) over the Star was the phrase “SOUTHERN RIGHTS”. Calling themselves “The Palmetto Guards” (in honor of their South Carolinian “roots”), it was speculated (but never seen) – that these colors were used by several independent Confederate Kansas Infantry Regiments. 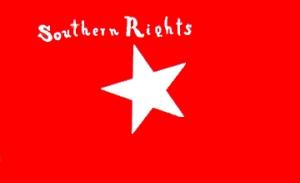