Formed in 1863 and under command of famed Confederate General Nathan Beford Forrest, his ''Cavalry Corps.'' was part of The Confederate Army of Tennessee. As Commander of all Cavalry, Forrest was one of the ablest Leaders in Horse The Southern Armies ever had. Originally numbering 2,000 Officers and Men (and organized into 4 Corps), it's numbers would swell into 5,000 at it's height. The Corps. Served in The Western Theater of The War and saw action in (8) of it's major Battles. Forrest was a cunning tactician who was noted for his ''never retreat'' mentality. However, after The Battle of Nashville, Tennessee (1864) – Forrest's Corps. Suffered severe and heavy loses. General Forrest attempted to reorganize them, but was unable to cull an effective fighting Force. He surrendered them in 1865 at the end of The War.

His Troopers wore the standard Confederate Grey issue Uniform. But by the end of The War, they were a collection of every color. As Light Cavalry, they carried Carbine, Sword and Pistol. Per Forrest's standing orders,His Corps. traveled light. Forrest used a Battle Flag of his own design. Based on The Army of Northern Virginia Southern Cross Battle Flag. The primary difference was in the arrangement of The Stars (each representing a Confederate State). Forrest's design placed (3) on each Saltire Bar – with none in The Center. 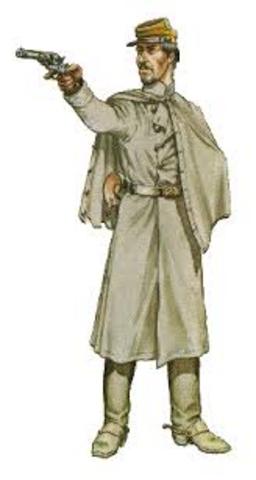