Maryland (like several other so-called “Northern States” and related Territories), were deeply divided during The American Civil War. Many Marylanders wished to leave The Union in favor of The Confederacy. Sympathizers adopted The Crossland Flag. Related to The Calvert Family (whose flag represented The Colony of Maryland under British rule), the “Matriarch” of the Family was Heiress to English title (and her own heraldic Standard). Consisting of a Cross Bottony of alternating red and white – this became the official flag of Confederate Southerners. Due to the quick suppression of “Rebel sentiment” by The Federal Government, this flag was never carried in battle or officially raised over an authorized Confederate facility. The Cross Bottony is still part of the current Maryland State Flag. 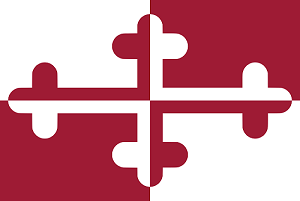