Like many early American Civil War Regiments that fought in that War, The Zouave-style of military uniform (as we have seen) – was very popular. Bright and stylish, as the War progressed – such extravagant uniforms would be quickly replaced with more ''functional'' and less garish ones. An early Southern Confederate Regiment which adopted a form of The Zouave-style clothing was The 1st Charleston City Cadet Zouaves. Formed in The City of Charleston, South Carolina in 1860. Consisting of roughly 1,000-Men, The Cadet Zouaves fought in many of the early South Carolina engagements of The War. However, The Cadet Zouaves were never actually ''sworn into'' Confederate Service until 1862. Enlisted as The 1st Regiment of Rifles (SC) with their inception into the active Army – many ore would be killed or wounded, until the Regiment was again merged into other late War Confederate Units. 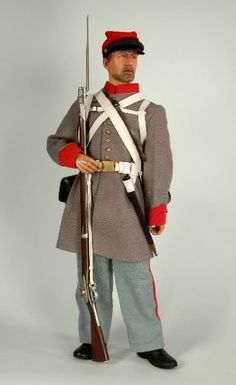